What Is The Price Of Zutec's Digital Handover?

Construction is one of the biggest industries on the planet but it remains the second least digitised industry, ahead of only agriculture.

It’s easy to see why. This is traditionally a practical, hands-on sector that puts trust in what is familiar and known to work (paper) above what is new and innovative (digital) - even if the latter is much more efficient.

Nevertheless, even construction has to move with the times to remain competitive. Key to convincing the sector to embrace a digital handover is demonstrating how seamlessly it can be integrated into, and improve, long-standing processes. Cost is also a factor, but one of the distinguishing features of construction is a willingness to invest in any solution that will translate into an advantage.

With every phase of every project subject to aggressive bidding, stakeholders throughout the construction life cycle can see tangible proof that digital delivers.

Switching to digital handover is more than a change in platform. It requires a transformation in mindset, not just in the way habits are adapted, but also in the attitude to return on investment. Workers on a project need reassurance that the software is reliable and easy to learn and use, whereas project managers need evidence that digital handover can actually release value, through:

Let there be no doubt that adopting a digital handover solution involves an upfront capital investment. It would be disingenuous to suggest that a digital handover can be implemented at the same cost as a paper-based solution. From that point on, however, digital outperforms paper in every phase.

Construction companies shouldn’t be asking themselves if they’re ready to adopt a digital solution. They should be focusing on when.

As Zutec Vice President of Solution Sales, Daniel Da Silva would argue, most already are. “People are using some kind of technology that is not specific to construction, such as Excel… even if they’re doing kitchen fit-outs or smaller jobs,” he says. “Two to three years ago, it was paper.”

How can digital handovers save money on a construction project?

An advantage of the Zutec platform is that it doesn’t require all features to be implemented in one fell swoop. Businesses can integrate individual tools where they will create most immediate value or solve the most urgent problems.

What are the most pressing problems? Traceability and transparency stand out, with uncontrolled information slowing down projects and driving up costs. Whereas a paper-based system offers no solution, a digital handover restores ownership of information to the people who are running the project.

A recent Zutec project for a new terminal at Abu Dhabi Airport serves as a notable example. With a paper-based system, inspection involved a 12-step process in which work had to be signed off, stamped, scanned and emailed. This took at least 20 days to complete. With the Zutec digital handover tool, the process could be reduced to about 1.7 days.

As well as saving money by reducing time to delivery, a digital handover improves accountability. When main contractors can identify exactly where hold-ups are happening, and who is responsible, they can fortify their position in advance and, if necessary, withhold payment from subcontractors who are driving up costs.

What do digital handovers cost?

The flexibility of a digital handover solution is a feature of the pricing system, too. Typically, a licence is issued on a project basis, so costs can be factored directly into the bottom line. In other cases, Zutec licenses the platform to a company that is delivering multiple projects on a Software as a Service (SaaS) basis, with the costs measured on a sliding scale.

The costs of using the platform can be broken down into the pre- and post-handover phase. For the main contractor, the licence will cover the tools to gather, collate and submit project data. For the end-user, the costs will cover cloud storage of data after completion.

In either scenario, there is no set figure for the cost of a digital handover. Rather, costs reflect the diverse range of construction projects, from single houses to large-scale office parks or skyscrapers.

Topic: The Ultimate Guide To Digital Handover In Construction 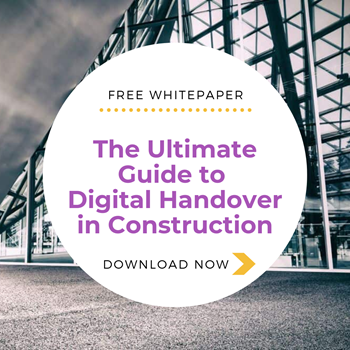 As we are in the final year and closing of the decade, we can look back on how the construction industry progressed through recent years; actively...
END_OF_DOCUMENT_TOKEN_TO_BE_REPLACED

While attending a Demonstration at Zutec’s Head Office based in Dublin, I was privileged to see the cutting-edge technology applied to the built...
END_OF_DOCUMENT_TOKEN_TO_BE_REPLACED
view all posts